Chloe Elgar is a truth-teller and a seer. She is the one who sees with her eyes closed. She is the one who sees in the dark. What you see is not what you get. Behind her big eyes, welcoming smile and open heart lives unmistakable wisdom, cut-throat truth and raw intensity. She will not just tell you what you want to hear. Her work is rooted in cultivating a different relationship with darkness and intuition. The tapestry of her life weaves in different spiritual aspects of the East and the West, thanks to a unique childhood growing up in Malaysia. A fierce believer in magic and ally to Mother Earth, Chloe surrounds herself with the wisdom and teachings of nature and the ancestors. Working with Chloe invites you to walk in the dark and to stop hiding from life. She works with people on claiming and developing their intuitive skills and strengthening their voice and expressions. Chloe works closely with the runes, ancestors, magic, animals, and nordic wisdom.

It was clear from a young age that Chloe was a bit different. From the moment she could speak, she was telling people stories, sharing surprising wisdom, and giving adults guidance. Her Mum jokingly would call Chloe psychic, as she would often tell her Mum things about people that she couldn’t possibly have known, and somehow did. Sometimes, after meeting with a friend or talking on the phone, Chloe would share her feelings about the person or messages about them that were outlandishly accurate. She was referred to as a know-it-all, all too often, which is a common characteristic of a claircognizant. Chloe was also very clairsentient and this was one of the channels that overwhelmed her. Growing up with parents who faught a lot, Chloe constantly felt weighed down, insecure, and in fear of what she was experiencing. In her early teens, she developed eating disorders, as a way to manage and control everything that she was experiencing. This was an effective way to shut down the energy channels that she couldn’t understand and create an illusion of control. During this time, Chloe dove deep into some darkness, running in every direction away from herself.

This period of time lasted through high school and into the first few years of University. Growing up in Malaysia, Chloe returned to Canada, her birthplace, for University. Her university experience was a blend of partying, hiding and searching for herself. After graduating, she began to dabble in cooking and through some deeper healing, found a new experience in her relationship with food. This is when the healing truly began. Healing from eating disorders and learning how to nourish herself and her body opened the doors to her intuition. As her psychic channels burst open, a remembering and reconnection began. A meeting occured, between who she once was and she was becoming. The path naturally progressed, and Chloe stumbled upon a teacher who introduced her to her intuition and developing her psychic gifts. This is when everything began to really change, fast. The energetic floodgates had been opened. This is when the real work started- learning how to stay grounded and rooted, as her psychic channels expanded, and confronting her fears and the reasons why she shut them down in the first place. It was an intense two years, and at the same time it was filled with so much excitement, inspiration and an undeniable feeling of being home. Chloe ended up moving from Vancouver, to join her husband in Austin, TX.

This move elevated her gifts even more and introduced another layer of healing and expansion. Soon after moving, Chloe was re-introduced to her fear of the dark and some of the aspects that come with mediumship and spirit communication. At this time, the runes and nordic mythology, as well as Celtic Shamanism began to enter her space and invite her into a deeper exploration of her ancestry.

Chloe has always had a deep and dear connection with animals and earth beings, and her long time guardian, Ollie, the miniature Australian Shepherd was always by her side. Her and her husband also invited another beautiful pup into their family, Blue, a red and large Australian Shepherd. These dogs were everything to Chloe; her children, her companions and her guardians. Within the span of 4 months, they both took their exit ramps and died, leaving Chloe in another initiation with darkness. Her spiritual work continues to evolve and grow as she follows the breadcrumbs of her guides and ancestors. Perhaps you can see yourself in Chloe’s story? Maybe there are parts of Chloe’s story that sounds familiar, or intruiging? Now that your questions about her have been answered, let’s come back to you. What are you looking for? What are you scared of acknowledging, out of fear of being rejected, abandoned, betrayed or even persecuted? It all begins with following the breadcrumbs, trusting the intuitive nudges and taking the leaps when the gaps appear. It’s time for you to start!

When you subscribe to this list, you will receive the prologue for free and will be the first to find out about all launch details pertaining Chloe’s new book, Revealed by Darkness.

Throughout life, we are gently introduced to death

Life is so twisty, isn’t it? Part of the process

Had the honour of joining @lisa__hillyer on her po

LAST HOURS of The Samhain Special over at @nightwi

Energy feels like it’s swirling right now. As it

To celebrate the first month of my shop launch and 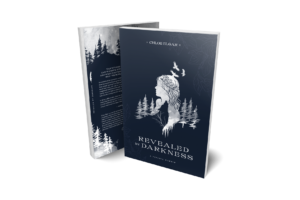 Chloe invites you into an intimate and vulnerable space, introduces you to the dark, and supports you in seeing that your power is limited if you only stand in the light. Click below to order:

Sign up to receive intimate insight into Chloe’s life, business and offerings that isn’t shared anywhere else